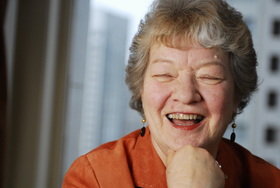 Joy Ibsen
Joy Ibsen was born in Tyler, MN and lived her growing up years in small town Midwestern communities. Today she is a writer, editor, musician, and piano teacher who lives in Albuquerque, New Mexico. A graduate of Grand View and Shimer Colleges, Joy did her graduate work in Religion and Literature at the University of Chicago, where she had two courses with Paul Tillich.

In July 2005 her first book, Songs of Denmark, Sange for Danskere: Songs to Live By, was published through A-R Editions, Inc. It contains 48 songs with photographs by prizewinning National Geographic photographer, Sisse Brimberg, and is accompanied by a 70 minute CD by the Grand View College Kantorei. The songbook reflects the philosophy of N.F.S. Grundtvig, who is also a major influence in her new book, UNAFRAID.

From April 2006 to December 2019 Joy was the editor of the periodical, Church and Life, a publication of the Danish Interest Conference under the auspices of the ELCA. In this capacity she enjoyed writing an editorial on social, political or religious issues (Post Script). She has also published several articles in Church and Life, including “The Wives of NFS Grundtvig” (Vol LVIII, September, 2008). Published articles in “The Bridge” include “Grundtvig in America” (“The Bridge,” Vol.41, 27, No. 2, 2018). In September and October, 2013 she studied “Grundtvig Today” in Denmark through a grant from the University of Aarhus and the Grundtvig Forum, conducting 32 interviews of scholars, students, administrators, educators and researchers throughout Denmark. The interviews were published in Church and Life.  In August, 2018 Joy participated in An International Symposium on the Influence of N.F.S. Grundtvig in London, England.

During the past ten years, Joy has presented numerous multi-media lectures. In April 2006 she was awarded the prestigious Danish Heritage Preservation Award by Grand View University and in 2016, the Laura Jean Deming Award by Pine Mountain Music Festival.

Joy has three children and two stepchildren.  She and her husband, Don Lenef, have five grandchildren.