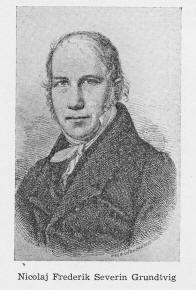 N.F.S. Grundtvig and the Theology of the Happy Danes

Danish educator, theologian, philosopher, poet, politician and hymn writer, N F.S. Grundtvig (1783-1872) is known as the father of Folk Schools and also the father of Public Education. Today he is also being studied as a nation builder. Grundtvig’s legacy is of special interest because a strong Danish national identity was formed from the bottom up, one which is compatible with democracy.  Grundtvig was able to foster a sense of community through education, song, body culture (gymnastics and folk dancing) and an interpretation of religion which emphasizes freedom, nature, and enjoyment of life.

What is most relevant about Grundtvig’s legacy?  There are many aspects to his work which pertain to alleviating major problems of the world today.  These include  (1) environmental issues--the importance of nature, including seeing ourselves as part of nature (2) educational implications—preparation for contributing to politics and culture through  life-long learning , characterized by an active exchange of ideas between teachers and students about  the world, history, literature, and the future  (3) ethnic and religious tolerance—Grundtvig’s philosophy/ theology of “Human comes first, and Christian next” has extensive implications for interpersonal and international relationships  (4) lifestyle --the beauty and essential goodness of ordinary life in contrast to a culture of experts and disproportionate materialism (5) social functioning—egalitarianism and community is central to a healthy society (6) widening economic gap—building a social structure where “few have too much and fewer too little.”

An extremely prolific writer, Grundtvig wrote more than 1500 hymns as well as numerous books including translations of Norse mythology. A controversial minister who became a popular Bishop, Grundtvig was critical of fellow clergy and the Danish church, and became and continues to be extremely popular in Denmark.  He was active in family life and very much a feminist for his time.  Married three times (his first two wives died during his lifetime), Grundtvig fathered his sixth child at age 76.

The Theology of the Happy Danes

Traces of two Danish American churches can still be found within the merged Evangelical Lutheran Church of America: the “Holy Danes” and the “Happy Danes.” The Holy Danes represented the pietistic movement in both Denmark and then the United States.  Holy Danes were not always holy, and Happy Danes were not always happy, but the two were theologically and culturally divided. Happy Danes embraced the reality of life, enjoying nature, culture, and community. Suffering, while unavoidable, is not seen as a way to please God. In contrast, the heritage of Holy Danes had its roots in the Inner Mission pietistic movement, and a more ascetic lifestyle.

For Grundtvig, the very fact of being human establishes common ethical values. One is to cherish and enjoy human life and to learn from nature. We are not merely custodians of nature; we are comprised of the same material and are part of it. One is to live a “simple, active, joyful life,” engaged in life-long learning. “The Living Word” surpasses the written word and requires truthfulness and freedom. The Bible is a holy book, but is not to be taken literally.  (The Bible is on the altar; the altar is not on the Bible.)

Today there is much less distinction between what remains of the two groups. However, Grundtvigian values and principles continue to live on and can be experienced throughout the world.

N.F.S. Grundtvig A Life Recalled, An Anthology of Biographical Source Texts Translated from the Danish and Edited by S.A.J. Bradley,  Aarhus University Press, 2008.